In 2015, the festival included the following:
Scroll down for the schedule of performances and for information about lodging, food specials, sponsors and supporters. 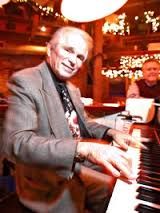 Jazz great Dick Hyman calls Bob Seeley "a force of nature - the best boogie woogie player on the planet!" Bob Seeley is possibly the greatest proponent of boogie woogie and stride today. His greatest influence was Meade Lux Lewis, a giant of boogie woogie along with Albert Ammons and Pete Johnson, and a friend of Seeley's. Bob first met the maestro in Detroit in the 1940s and a longstanding friendship developed which influenced Seeley, resulting in his rhythmic style. He also chauffeured and played piano with Art Tatum, who reportedly was duly impressed. Eubie Blake was also among Seeley's circle of friends.  Bob will play inside the Waldron auditorium at 6:05 p.m. 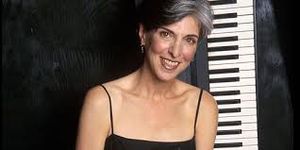 Multiple winner of Pinetop Perkins Piano Player of the Year and Best Contemporary Blues - Female Artist, Marcia Ball's music has been described as "an irresistible celebratory blend of rollicking, two-fisted New Orleans piano, Louisiana swamp rock and smoldering Texas blues" and "a living example of how East Texas blues meets southwest Louisiana swamp rock." Along with her recordings on Rounder, including Soulful Dress (1983), Hot Tamale Baby (1985), Gatorhythms (1989), Let Me Play with Your Poodle (1997) and Sing It! (1998) among others, she has released six excellent records on Alligator, all while touring extensively.  Marcia will play inside the Waldron auditorium at 6:40 p.m. 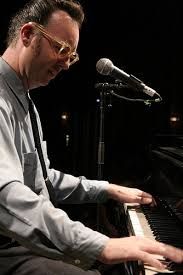 Master of boogie woogie, blues, and ragtime, Sonny Leyland was initially influenced by boogie woogie greats Ammons, Johnson and Lewis. He has gone on to fully explore the blues, becoming an authority on early and obscure styles such as played by Cow Cow Davenport, Little Brother Montgomery, Montana Taylor and Speckled Red. His repertoire has expanded to include ragtime, early jazz and rockabilly, and his playing displays an infectious spontaneity. While he possesses the necessary vocabulary to pay tribute to the greats, he refuses to limit himself and makes each performance an opportunity to say something new.  Sonny will play inside the Waldron auditorium at 4:10 p.m.

Liz Pennock & Dr. Blues have performed together since 1983. Ohio natives based in St. Petersburg, Florida, this premier piano/guitar duo captivates audiences with their vast repertoire of classic, contemporary and original blues. Their music varies from deep traditional blues to rock-tinged blues, with an occasional blues ballad thrown in for good measure. Liz astounds the public and musicians alike with her unique, powerful piano style which she developed despite being born with only three fingers on each hand.  Liz and Dr. Blues are regulars at the Cincinnati Blues Fest and at many other blues and boogie festivals around the world.  Liz and Dr. Blues will play in the Waldron auditorium at 5:30 p.m.

Multi-instrumentalist and Zydeco accordionist "Sunpie" Barnes combines blues, boogie woogie, Caribbean, Gospel, funk, Zydeco and West African rhythms in his band, Sunpie & The Louisiana Sunspots. Lately, Sunpie has been touring with Paul Simon. A former NFL football player, when he's not on the road, Sunpie resides in Louisiana, sharing Louisiana culture as a Ranger at the New Orleans Jazz National Historical Park. He is co-editor of the book Talk That Music Talk: Passing on Brass Band Music in New Orleans the Traditional Way!  Read an article about Sunpie in the May 1, 2015 New Orleans Times-Picayune.  Sunpie will play inside the Waldron auditorium at 3:35 p.m. 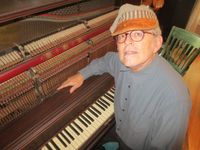 Festival organizer Craig Brenner explores the jazzy side of blues and boogie woogie piano in his recordings, performances and compositions. Leader of Craig & The Crawdads, Craig has spent time and studied with blues and boogie woogie masters Bob Seeley and the late Big Joe Duskin. As a composer, Craig writes, arranges and records solo and group jazz, blues and boogie woogie. His most recent recording, Live At The Old Mint: Blues & Boogie Woogie Piano, was recorded live in New Orleans and features "Uganda" Roberts on congas and Lori Brenner on rubboard.  Craig will kick off the performances in the Waldron auditorium at 3 p.m. 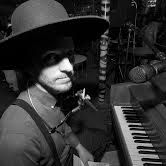 Ross E. Martinie Eiler often plays piano with gloves - because, well, if you played as hard as he does, you'd wear gloves too!  An intermittent Jerry Lee Lewis impersonator, Ross often performs with his band, The 123s, a rock'n'roll piano-bucket party brigade known for their energetic dancing, channeling Ray Charles, and the clog-dancing pirate.  Ross is co-founder of the Bloomington Catholic Worker, a member of the Mennonite Fellowship of Bloomington, a husband, father, environmental activist, and beekeeper.  Ross will be performing outside the Ivy Tech Waldron at 2 p.m. 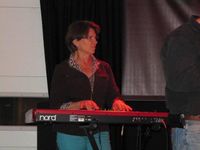 Pianist Michele Brentano, vocalist Zain Mackey and guitarist Lee VanBuskirk comprise half of O2R Blues Band and have played together since 2004.  Michele is also a member of Cliff and the Guardrails, Forest Gras Blues Band, and Swingsmiths. The ensemble will be performing outside the Ivy Tech Waldron at 4:45 p.m.

The artists performed solo and accompanied by 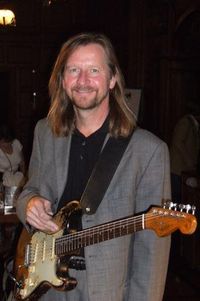 Leader of The Gordon Bonham Blues Band, co-founder of The Ragin' Texans and Cooler Kings, and guitarist in Craig & The Crawdads, Gordon Bonham has performed with the late Pinetop Perkins, most notably in Cleveland along with Robert Lockwood, Jr. at the grand opening of the Rock and Roll Hall of Fame. Gordon also played for ten years with the late Indianapolis blues mandolin man, “Yank” Rachell, as well as Chicago pianist Jimmy Walker. Gordon has worked as band leader with Bo Diddley and rang in the 2000 new year at the Slippery Noodle with Blues Brother Matt “Guitar” Murphy. 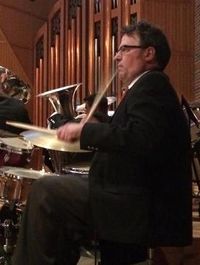 Drummer Dan Hostetler has a long history of playing with some of the biggest names in blues and New Orleans R&B. Having performed annually with the late guitarist Earl King, Dan has spent time in The Butanes, Craig & The Crawdads and The Ragin' Texans, and toured and performed with the Dallas Brass, Boston Brass and other ensembles. Dan is an in-demand percussion clinician and drumline instructor who is equally at home playing blues, jazz, pop and classical music. 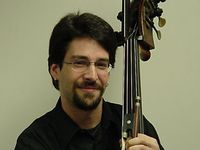 Bassist Ron Kadish has played throughout the U.S. and Europe with diverse musicians and groups, including John Denver, the Moody Blues, Mary Chapin Carpenter, Sarah Mc Lachlan, Jerusalem Symphony Orchestra and Craig & The Crawdads. Since 2010 Ron has worked in multiple capacities for Arizona-based Lonely Street Productions. Ron holds a Bachelor’s in Music and a Master’s in Jazz Studies from the IU Jacobs School of Music. While not on the road, he resides in Bloomington, IN.

Sax player Joe Donnelly has taught band, orchestra, choir and general music at middle and elementary schools while playing professionally in Bloomington, Indianapolis and Chicago for 20 years.  He performs with Craig & The Crawdads, The Klezmorchestra, Piney Woods and the Pawnshop Playboys, and his own group, Joe Donnelly and the indulgences. Currently teaching at Jackson Creek Middle School, Joe recently wrote and conducted the world premier of "Washboard Blues: The Bloomington Youth of Hoagy Carmichael," featuring a 30-piece orchestra, "hot jazz" band and vocals.  Joe's soulful bari- and tenor sax playing harkens back to the juke joints and barrelhouses of old. 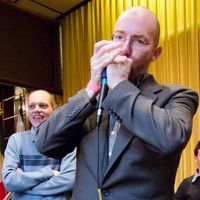 Josh Davis has been a serious devotee of Swing and Blues Dance since 2009, and in recent years a teacher for Panache Dance and the Indiana University Swing Dance Club. In his lessons, Josh emphasizes humor and musicality, making dance an approachable way for students to enjoy the music together. Josh can be found at his weekly drop-in Blues classes at the Player's Pub, at live shows around town, and at weekend dance workshops in the near Midwest. Josh danced at the festival and taught East Coast Swing and Blues Dance before the festival began -

The class took place immediately prior to the start of Bloomington Boogies. Instructor Josh Davis, who formerly taught for Panache and the IU Swing Dance Club, emphasizes humor and musicality in his teaching and dancing. After the class, Josh and partner Amanda Guieb danced at the festival from 3 p.m. - 7 p.m. 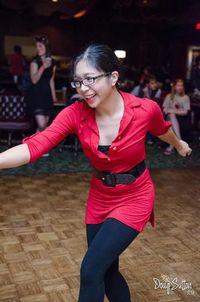 With music as a lifetime love, Amanda Guieb found her passion for blues music and dancing as a part of a dance club at Purdue University. In her free time, Amanda enjoys traveling around the Midwest looking for live music and a spot on the dance floor. Currently residing in Indianapolis, you can often find her downtown dancing in the historic Fountain Square area or at the Slippery Noodle Inn.  Amanda and Josh danced during the festival.

2 p.m. - Music Outside the Ivy Tech Waldron on the Arts Plaza - Ross Martinie E. Eiler and members of the 1 2 3s

Note:  Performances inside the Ivy Tech Waldron Auditorium required tickets!  Tickets sold out.  Music outside the Waldron and at Bloomington Boogies After Hours was free!
Food and Beverages

Lodging Special festival rates were available at
After the festival, more music at
Bloomington Boogies After Hours
featuring performances at

Malibu Grill on the Square is located at 106 N. Walnut St., Bloomington, IN

Thanks to Major Festival Sponsors 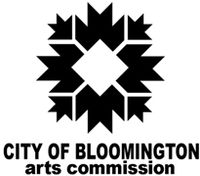 Thanks to Festival Underwriters 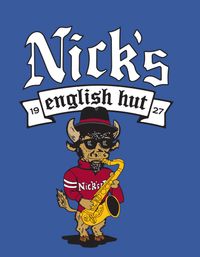 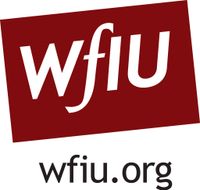 Thanks also to Additional Event Supporters: 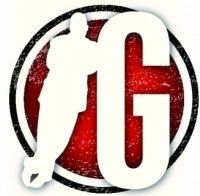 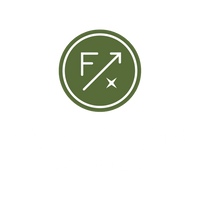 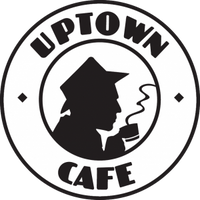 The festival was awarded a 2015 Visit Bloomington Tourism Grant. Read about the grant at VisitBloomington.com.

The festival was supported in part by the City of Bloomington Arts Commission's Arts Project Grant Program. Read about the grant at bloomington.in.gov/arts.

This activity was made possible, in part, with support from the Indiana Arts Commission and the National Endowment for the Arts, a federal agency.  Read about all the individual artists and projects receiving FY 2016 IAP grants.


For more information about the festival, or if you are interested in sponsorship opportunities, contact Craig at 812-334-0415 or craig@craigbrenner.com.

More about the festival on